I first met Joseph Petrovics in 2003, after my law firm, Holland & Knight, committed to sponsor the Firefighters’ Memorial Wall to honor the members the Fire Department of New York lost on September 11, 2001. The assignment of finding an artist to sculpt a moment frozen in time was given to me. Joseph came highly recommended, through the Memorial Wall’s designer, Viggo Rambusch of Rambusch studios, and we were soon introduced. Not much later, I stood in awe in New Britain – Newington, Connecticut viewing Joseph’s Iwo Jima Memorial in bronze and granite. It spoke to me of heroes, and I knew then that Joseph Petrovics would sculpt another triumph for the world to see.

Not long after Joseph began his work on the Firefighters’ Memorial Wall, I was called in to approve each step of his sculpting process. My consents came easily as the veritable scene from 9-11 began to unfold. Though this Memorial exudes the portent of loss, it speaks of humanity through masterful depictions of fearless souls committing courageous acts. President George W. Bush, upon his visit to the Memorial Wall, called the work a national memorial. And so it was that yet another national memorial by Joseph Petrovics had come to be.

The United States is blessed by Joseph Petrovics’ 1988 decision to adopt our country as his own, and I am grateful for the impact that Joseph’s work has had on the millions who are compelled to reflection at the Memorial Wall, at the Iwo Jima Memorial, and at his many other remarkable works located throughout the world. His approach is based on his vision, for Joseph does not take on jobs. instead, he takes on missions that involve as much of his heart as his hands and mind. The result, each time, is a work of eternity.

I consider him not only a sculptor of national memorials, but a national treasure himself. 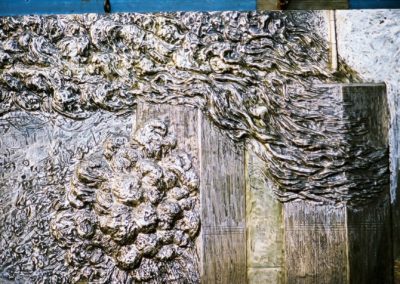 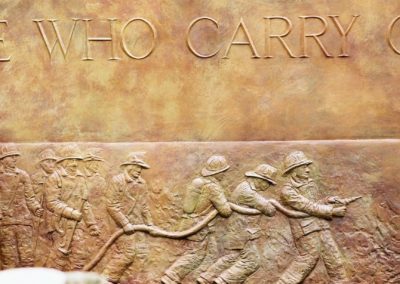 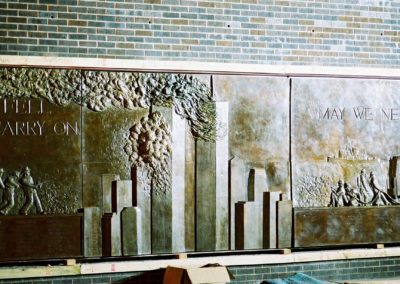 The Joseph Petrovics sculpture National Iwo Jima Memorial Monument was unveiled and dedicated on February 23, 1995, the 50th anniversary of the historic flag raising on Mount Suribachi.

The Monument is similar to, but not a replica, of the Marine Corps Memorial in Washington D. C. What makes our monument unique is features it possesses. The base contains 10 different India polished black granite panels. On the front, are inscribed the names of the 100 men from Connecticut who died during the battle and to whom the monument is dedicated. Also on the panels are names of the men who raised the first and second flag on Mt. Suribachi. There is also a map, famous quotations from the battle and historic facts and figures.

Incorporated into the base is sand from the shores of Iwo Jima. At the feet of the men, are genuine rocks from Iwo Jima. 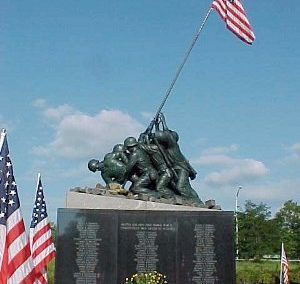 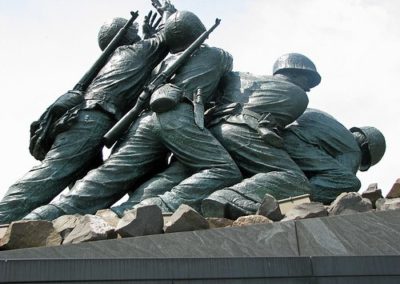